Who will win the 2012 Ozark Conference? Head on over to the Ozark Ultimate facebook page and vote.

The Ozark Conference Championship is just days away and the seedings for the tournament have yet to be announced. With that in mind, Ozark Ultimate is going to take a stab at what the seeding and the tournament could look like.

11-9. B-Teams. It is sad that the B-teams do not have a conference of their own. It would be very beneficial for them to play games where each opponent was more evenly matched. That being said, none of these teams are legendary – like Wisconsin-B in 2005 (29-17) – and they should be the bottom seeds going into the tournament.

8. Central Arkansas. Central Arkansas is for all purposes a new team this year. They won two games in their first tournament at Hendrix and notched four more in the Heart of Texas Huckfest. Central Arkansas has fielded a team before, but the last time UCA competed in the series was 2004, and it did not go well. While this team has barely anything in common with the 2004 team, they are still young, inexperienced, and this weekend will be an eyeopener.

7. Missouri State. The Bears started the season off right with a second place finish at Hendrix Ultimate Experience in a close championship game loss to Harding. They played respectably at a shortened Mardi Gras, but started to show issues at Chicago Invite. At Huck Finn the Bears had real problems on Saturday, beating only Wash U-B. Things started to click again on Sunday, but it does not look like this young team has quite figured out how to win tough games.

6. St. Louis. Loki is in much the same boat as Missouri State. They started off on a high note at Music City Tuneup, had trouble at Chicago, and started to figure things out at Huck Finn. St. Louis gets the nod over Missouri State since they beat Southern Illinois and lost by fewer points to Hendrix at Huck Finn.

5. Missouri. Missouri is an unusual team. They beat Arkansas to open their season, and put up quite a few points on Kansas and Kansas State. However, they severely hurt their chances by taking a small squad to Centex and winning just one game – against UCLA.  At the Kentucky Classic last week, Missouri finished third, losing only to Indiana. The MUtants have the talent to go far, but they have only showed glimpses of that ability so far this season.

4. Oklahoma. The Apes of Wrath have one of the deepest teams in the conference, but their ability to use all of that talent successfully has been streaky. Oklahoma has had several close games this season – eleven out of twenty four games have been decided by three points or fewer – and some mid-season personnel adjustments seemed to have helped.  The Apes are the dark horse of the conference and can beat any team at the tournament.

3. Kansas. Some teams look good on paper but do not play up to that ability on the field. This season, Kansas is one of those teams. The HorrorZontals have not had the best season in team history, but they always come prepared for the postseason. They earned this spot with wins over Missouri and Northwestern, and by splitting games with Illinois and Kansas State.

2. Washington University. “Consistently inconsistent” is a term that could describe Washington. At Huck Finn the Contrabears barely beat Harding, but then turned around and clobbered Ohio State. Contra has had a good season by winning the Midwest Throwdown and almost beating Wisconsin and Illinois. Unfortunately for them, Kansas State has put together a slightly better year.

1. Kansas State. The Huckstables have had a breakout season, utilizing a handful of stars and many athletic role players. This year, Kansas State won Big D in Little D, got second at the Free State Classic, and finished fourth at Centex. The Huckstables have  a legitimate shot at Nationals but have to win the conference first. Several strong foes stand in their way, including Washington, who slides in just under Kansas State on the basis of point differential on head-to-head opponents.

The crossroads of the 2011 ultimate disc season is here. With six weeks of tournaments in the books and five or six weeks left until conference tournaments, the good teams are starting to separate themselves from the pack.

The Ozark Conference has one team in the top 25 and three teams in the top 50 of USA Ultimate’s latest ranking. These rankings are based on an algorithm and may or may not reflect a team’s true strength. Since the season is still young and this is the Ozark Conference, it would not be surprising if many of these teams switched places before the Conference Tournament.

USA Ultimate standings as of March 16.

Building on the success of last years All-Section team the Ozark Blogsite is proud to announce the Preseason All-Section team. The team, which was voted on by a panel of peers, represents the finest the Ozark Section has to offer in spirit and skill.

Over twenty players were nominated for the Preseason All-Section team but only the top seven were chosen for the honor.

For the second year in a row, the University of Kansas HorrorZontals were picked to finish first in the Ozark Section Top 10 Preseason Poll. Last year the poll chose Kansas to win the sectional crown, but the HorrorZontals were upset in the semi-finals by Washington University. The Contrabears went on to claim the section for themselves by defeating Arkansas in the finals, 12-11.

The poll – which is in its second year – consisted of the South Regional Coordinator, the Ozark Sectional Coordinator, representatives from nine teams, and two members of the media. All teams in the section were eligible to vote, although several teams never returned their ballots.

This was the first year for the poll, which was open to all teams in the Ozark section. 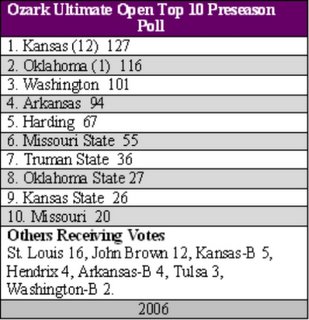