Arkansas’ Graduate Captain Matt Jackson and All-Ozark Player of the Year has been named a 2012 Callahan Top Ten Finalist.The award is the highest individual award in college ultimate. 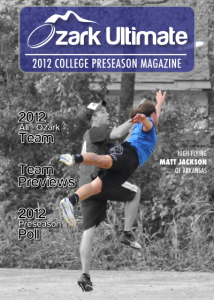 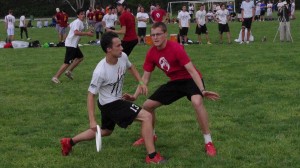 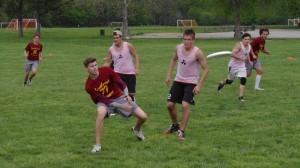 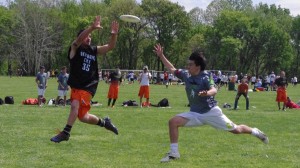 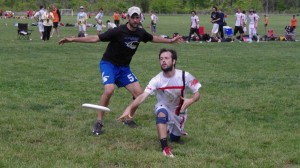 The Kansas HorrorZontals rallied from a five point second half deficit to stun Arkansas’ Ludicrous Speed, 13-10.

“We got down big and tried to do too much at once. Once we started focusing on one point, one cut and one catch at a time we started taking care of business,” said Kansas captain Joe Young.

Arkansas jumped out to a commanding 7-4 lead to take the first half on the back of several upwind breaks. After half Arkansas scored the first two points to make it 9-4, and then began to rest their starters.

Kansas kept up the intensity though, taking advantage of Arkansas’ second line and quickly scored three straight, 9-7. Arkansas’ starters reentered the game but Kansas’ Frank Plummer Jr. hustled down field to get a layout d that both shocked Ludicrous Speed and fired up the Zontals. Kansas used the layout as a catalyst to score several more points without a single turnover over a stunned Arkansas to take an 11-9 lead.

“Kansas is a good team,” said Arkansas captain Matt Jackson. “They really know how to take advantage of us when we get down on ourselves.”

After a timeout, Arkansas calmed down and appeared as if they were going to score but turned it over just shy of scoring. However, they got the disc back and caused Kansas to make its first turnover in seven points. However, with Arkansas finally moving the disc, Plummer Jr. got another layout d and finished it with a sliding layout for a bookend point and make the lead 12-9.

Arkansas would finally score on the next point to stop Kansas’ eight point run, but it was too-little too-late, as the Zontals answered to finish the game one point later. 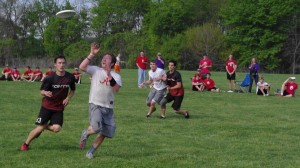 It looks like the weather in the Kansas City area will be interesting to say the least for the 2012 Ozark Conference Tournament. With severe storms and strong winds predicted for the weekend, this tournament could be heavily influenced by the weather.

I was pretty fired up to see Huck Finn this year. Some of the national contenders from previous years were not going to be there, but Harding and a handful of other Ozark teams looked like they would put on an interesting show. Add in the wet fields from the week of rain and games were going to be downright exciting.

Unfortunately, after arriving in St. Louis, this reporter got very ill and received a gift of feverish misery. What a shame that was, as there were upsets, head-scratchers, and crazy results all weekend long.

Despite my illness the cameraman was still able to go tape the first few rounds to give a little insight into the events at Huck Finn.

1. Harding: Apocalypse is hitting its stride at just the right time.  In their last three tournaments Harding has just three losses, and two of those are to Texas A&M. Returning all the big names has definitely helped them, but the bench is playing a bigger role than they did last year, and that has made a big difference.

2. Washington (St.L): Contra is out to prove that even without Winograd or MacDonald, though they may not be the undisputed best in the conference, they are still a force to be reckoned with. They’re already showing some of that; if they can bear down on teams, go for the kill, and not make so many mental mistakes, Contra could be walking away with another Ozark Conference Championship.

3. St. Louis: Sleeping in their own beds surely gave the Arch Angels a boost. Still, losing by two to Harding and beating Kansas on Sunday to make the semifinals is a solid showing that has more to do with skill than a good sleep. St. Louis has improved their turnover ratio from Free State and that has made a big difference. If they keep this up the Arch Angels may be showing some teams an unexpected exit at the conference tournament.

4. Kansas: The HorrorZontals are in a weird place right now. They have a talented team and solid coaching. Unlike last year they appear to have made strides in working together . However, Kansas still seems to have problems getting it going sometimes — especially on Sundays. That ugly fact reared its head once again as Kansas fell to St. Louis. The HorrorZontals are going to have to fix that if they want to return to their former glory.

5. Oklahoma State: You never know which Ultimato team is going to show up, literally or physically. Oklahoma State took rival Oklahoma to the brink, 14-16, at Big D, but they laid an egg at Huck Finn, finishing in the 19th place bracket. Ultimato did bring a small squad to Huck Finn and that did not help, but they need to turn things around next week at the Heart of Texas Huckfest if they do not want to be seeded in the basement at the Ozark Conference Tournament.

Due to an unfortunate reporter illness, Ozark Ultimate’s coverage of Huck Finn has been cut short. Sorry for any inconvenience. We will post the games we have later this week.