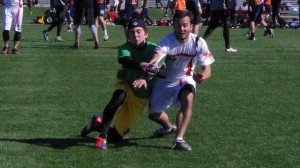 Kansas took the lead in the beginning of the game by pulling to start, getting a layout d and then punching it across the goal line. From there Truman and Kansas traded points to make it 2-2. After a timeout by Kansas the HorrorZontals would score the next three points without committing a turnover to stretch the lead to 5-2. Kansas would go on to take half at 8-3.

“We tried to come to come out with the intensity that we brought for the first two games,” said Kansas captain Joe Young. “We let the game get a little bit away from us, but after we focused back down we were able to take control of the game.”

The next point would be one of the worst in ultimate history — with both sides combining for 23 turnovers and a point that went just shy of 25 minutes. Kansas would eventually finish the point just seconds after hard cap expired to win the game 13-6.