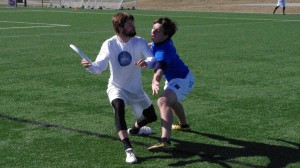 The second point of the game between St. Louis and the University of Nebraska-Omaha had a combined 25 turnovers. But beside that low-light the St. Louis vs. UNO match was a quick 45 minute match with St. Louis coming out on top, 15-6.

St. Louis took the lead from the first point and never let up. It helped that the Arch Angels had a much larger squad than UNO and were able to use fresh legs to their advantage. St. Louis used that advantage to take half at 8-5 and outscored UNO 7-1 in the second half.