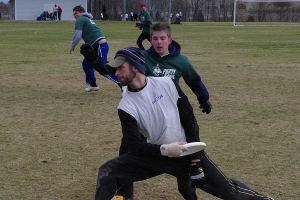 Arkansas Ludicrous Speed defeated University of Tulsa Party Fowl 11-3 in the first round of Big D in Little D on Saturday.

The game moved quickly out of reach for Party Fowl as Tulsa was unable to work the disc against the wind. Arkansas took advantage and the first half, 7-0.

In the second half, Arkansas played their bench while Tulsa quit rushing their passes. This turn of events allowed Tulsa to go on a 3-1 run. Tulsa’s offensive prowess was short-lived however, as the game was hard capped at 11-3, with Arkansas scoring the final point.

“It feels good to get the first win of the season,” said Arkansas captain Matt Jackson. “This is the spring season and we need to start the trend of winning now.”