Every ultimate player is familiar with the disc. The feel, the shape, the weight. But did you know that the early fathers of disc sports gave names to the individual parts?

In fact the discs your parents played with had parts called Melin’s Line and Cupola Roof. Alas, our modern discs are not as complex, but still share some of the same parts. 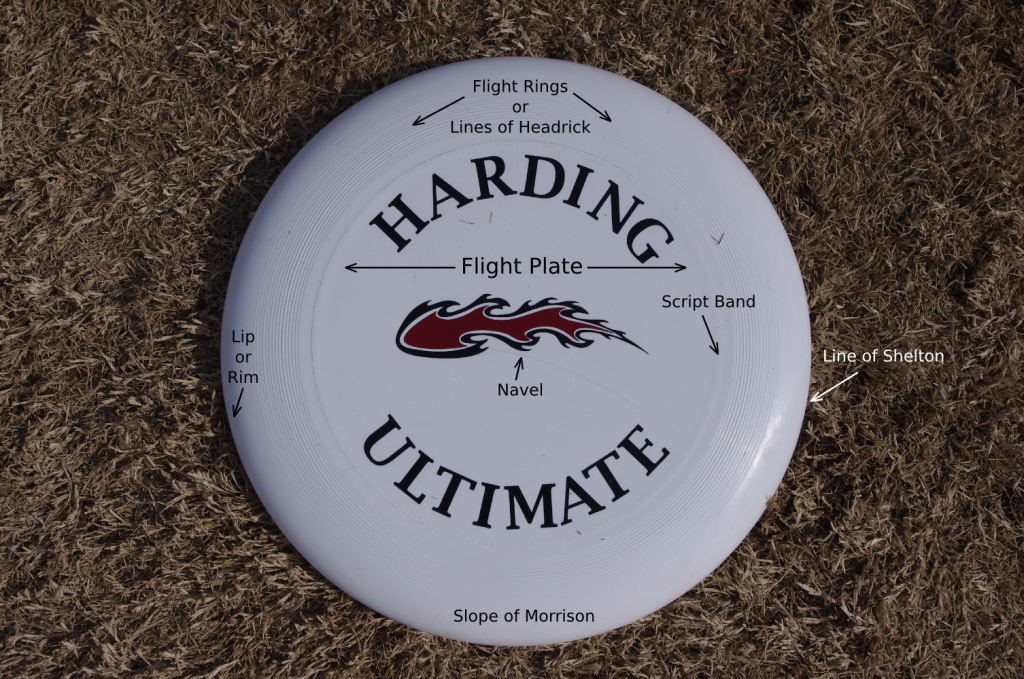 Lip or Rim – The outside wall of the disc

Line of Shelton – The mold line that runs around the lip of the disc. On some historical models this line extends slightly from the disc. Named after Jay Shelton, a professor of physics and one of the first people to study the flight characteristics of a disc. He also was a world distance record holder, won the first disc golf tournament in 1969, and from 1969 to 1974 was considered the individual Frisbee world champion.

Slope of Morrison – Named after Fred Morrison, the inventor of the Frisbee. This is the bent slope from the flight plate to lip. It was a major improvement from pie tins and popcorn lids and kept the disc from turning on its side on every throw.

Flight Rings – Also known as the Lines of Headrick, for Ed Headrick the perfecter of the flying disc. Without these a disc is much more likely to turnover. When Whamo’s patent for the flight rings expired Discraft added them to the Ultra Star and took over the ultimate market.

Flight Plate – The flat surface on the top of the disc. The hot stamp goes on the flight plate.

Script Band – The number and size of these have changed over the year. Currently the discs we play with have just one. It acts like a big flight ring and carries the name and model of the disc.

Navel – Center of the disc. There is usually a small spot here left over from the manufacturing process. Historical discs have much larger and varied nave

For more information on the named parts of a disc look for: Johnson, Stancil. (1975). Frisbee: A Practitioner’s Manual and Definitive Treatise. New York: Workman Publishing Company